On 21 February, following a complaint filed by PETA India and the CAPE Foundation, Kolkata police registered a first information report (FIR) against a horse owner and an event management company for allegedly using a debilitated horse with serious untreated wounds and severe lameness in a marriage ceremony. The deep wounds on the horse’s legs, which were reportedly caused by a road accident, were hidden with lime. Just two weeks ago, an FIR was registered against a carriage owner and his accomplices for allegedly treating a horse with negligence after the animal collapsed on the busy road in front of the Victoria Memorial. 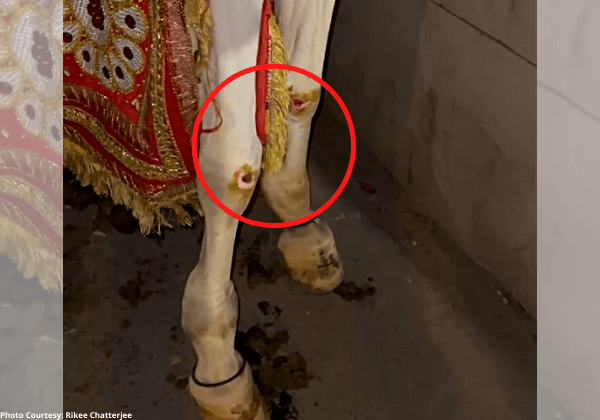 A recent report by PETA India and the CAPE Foundation revealed that more than 100 horses used for rides in the city are anaemic, malnourished, and chronically starved; some suffer from severe injuries, including bone fractures; and many are forced to live amid their own waste on filthy, decrepit, and illegally occupied premises in the city, including an encroachment area under a flyover. A factsheet in the report lists 10 road accidents in Kolkata involving horses, highlighting the dangers of using them to haul tourists. Such accidents cause the animals unnecessary pain and suffering and pose potential safety risks to the passengers in the carriage and commuters on the road.

Help End the Use of Horse-Drawn Carriages in Kolkata