You’ll soon see her magic again on the silver screen, but you’ve never seen her like this before: dressed in white attire to resemble a bird, Bollywood’s sizzling hottie Adah Sharma peered through bars while locked up in a cage and holding a sign that reads, “Let Birds Fly Free. Don’t Cage Them”. Her point? That birds were born to be free and that locking them in cages and denying them that freedom and the opportunity to fly is cruel. 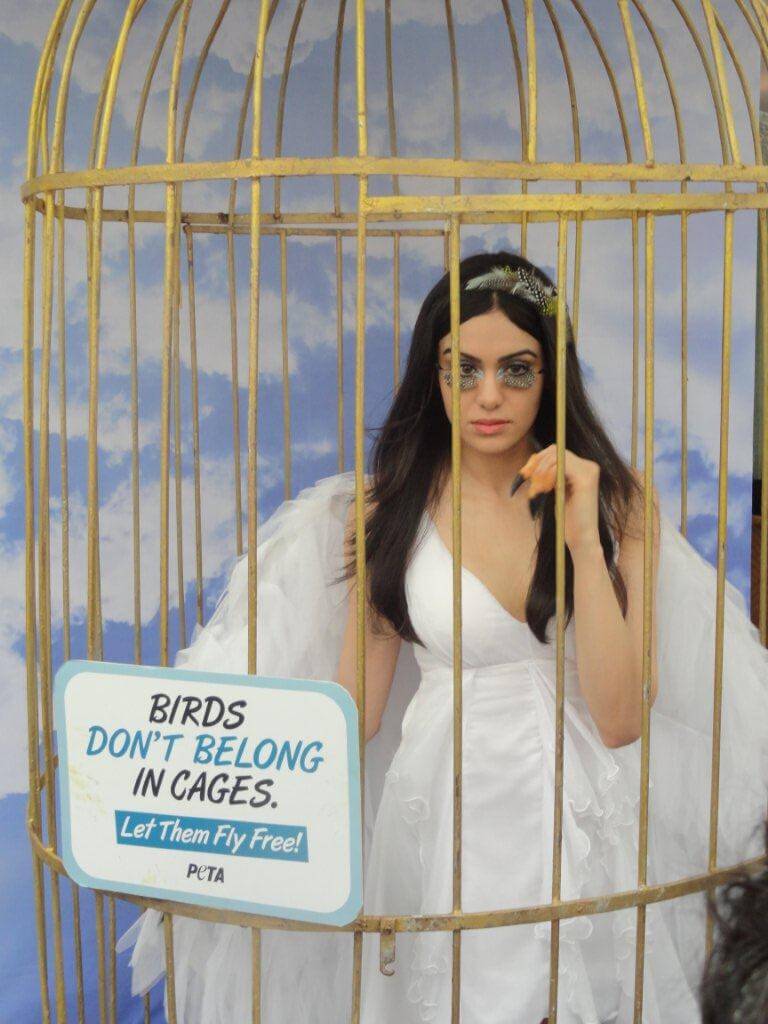 “How would you feel if for no reason you were kidnapped from your home, stuffed into a box, and transported far away, only to live the rest of your days in a crammed up jail, not being able to choose what you eat and who your partner is?” says Adah. “Birds enjoy their freedom just as we do. If you really love birds, don’t cage them – buy a pair of binoculars and watch them spread their wings and reach for the sky.”

Sharma’s performances in the Bollywood films 1920 and Phhir were publicly acclaimed. Soon, she will be seen in the much-anticipated Hum Hain Raahi Car Ke with Sanjay Dutt and Juhi Chawla.

When birds are caged, these same vibrant animals become depressed and withdrawn. Some people force birds to endure wing-clipping so that the animals cannot fly away, yet flying is as natural and as important to birds as walking is to humans. When birds are captured and packed into small boxes for shipping, many suffer and die in transit, usually from broken wings and legs, dehydration, starvation and stress.

Keeping birds in cages is both cruel and often illegal. The government has banned the capture and trade of all 1,200 species of indigenous birds in India. Despite the law, birds, including munias, mynas, parrots, owls, hawks, peacocks, parakeets and other species, are openly sold in markets.

The best way to stop this cruelty is never to buy birds and to discourage others from buying them. You can help save your feathered friends by pledging never to cage them!