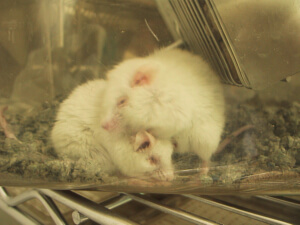 Before taking your next sip of tea, check the label on the bottle because you may be drinking a cupful of cruelty to animals. Nestlé, the maker of Nestea, tests and pays others to conduct painful and deadly tea tests on animals. The company has caused animals to suffer simply to investigate the possible health benefits linked to tea products and ingredients.

In these cruel tests, mice and rats were tormented and then killed by such means as decapitation. The following are some details of the horrors endured by the animals used in Nestea’s tea experiments:

Modern, cruelty-free research methods are available and in use by other leading beverage companies around the world. We need YOU to join us in telling Nestea to ditch its cruel-tea to animals and to use non-animal methods instead.

Please help us by writing to Nestea’s office about the cruelty of testing on animals. Urge company officials to stop such tests right away and to switch to non-animal methods instead.

Make sure that your voice is heard by calling Antonio Helio Waszyk, the Chair and Managing Director of Nestea India, on +91-124-2389300. Tell him why Nestea should stop testing on animals.

Please also consider mailing and faxing a message to Nestea’s office in India: