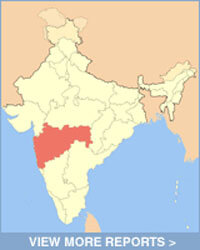 This monkey is kept in a dilapidated cage with torn mesh, no environmental enrichment and nothing to stimulate his mind.

This is a view of the monkey in his small cage.

This is one of the two dogs kept in the zoo in a small enclosure.

The water pool in the small dirty crocodile enclosure is half-empty.

This bear has a stick attached to the rope in his nose.