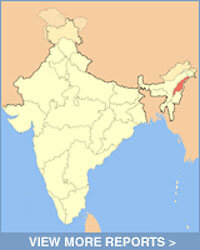 This bear has gone mad, reaching out with his paws and gnawing at the bars.

This is another bear enclosure. The roof and the flooring are all broken. A dirty drain runs in front of it. There are people living right next to the cage.

This is another bear enclosure. Visitors look at the bear from the windows in this wall. The bear cannot see anything.

The bird enclosure (on the left) does not provide shade, shelter or enrichment. It is also very close to the neighbouring village and offers no security to the birds.