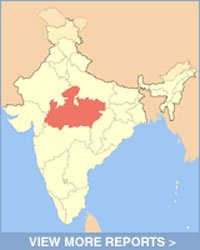 Visitors were allowed to feed roaming peacocks. The birds’ diet was unregulated, unmonitored and inconsistent.

The lion with a skin infection on his back and flies sitting all over. Stones thrown by visitors are visible.

The crocodiles don’t have access to the water pond.

A monkey kept alone in a small cage – his food is strewn about on the ground.

The bear enclosure has no environmental enrichment at all.

The barren fox enclosure with pieces of meat lying all over the floor.