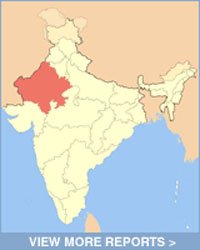 This broken fence can hurt the jackals.

The porcupine enclosure is falling to pieces. The walls are broken, and rods and pipes are exposed.

This open gutter runs alongside the animal enclosures.

This group of monkeys lives in a dirty enclosure which lacks any sort of enrichment. Rice and milk have been thrown on the floor for them to eat and drink.