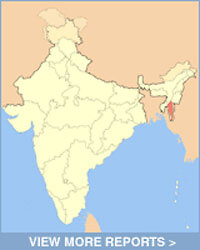 The sambar has no food or water in his enclosure. He is foaming at the mouth from thirst.

The porcupine has dirty water, and the only food in his cage is a piece of rotten fruit. The enclosure is barren.

This animal looks tired and thirsty. His unmarked cage is very small, containing only a rotten piece of chicken half-eaten by ants.

The two black bears have no food or water in their dirty enclosure, which is littered with lots of plastic bags, stones and other debris.