PETA India’s Hottest Vegetarian Celebrity of 2013 contest was fierce, as early leaders Jacqueline Fernandez and Shahid Kapoor as well as Amitabh Bachchan, R Madhavan, Kareena Kapoor and Vidya Balan put up a real fight. But now, after thousands of votes were cast to help PETA India choose the winners, the results are in, and Bullett Raja hottie Vidyut Jammwal and Krrish 3 star Kangana Ranaut have taken top honours. 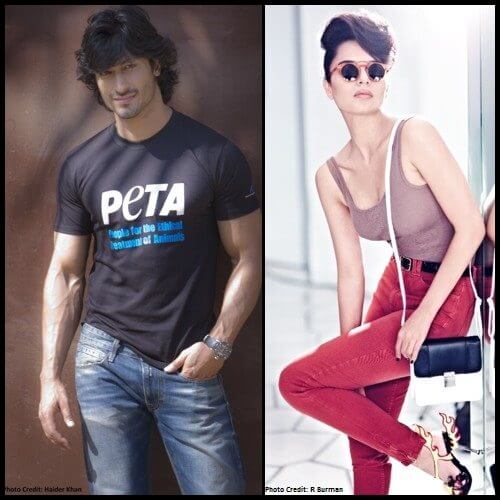 Vidyut recently appeared in a PETA ad promoting the health benefits of vegetarian foods. He says, “I believe that everybody should be [vegetarian] because it has a lot of benefits. Being a vegetarian keeps you very agile, keeps you on the toes and doesn’t make you feel lazy. I personally believe that being vegetarian is the way because I have felt the changes – I have seen myself evolve as a human being, mentally as well as physically”. And Kangana, who recently went vegetarian, says, “We must not eat other animals. Besides, vegetarian organic food is far more healthy minus all the toxins”.

In addition to causing animal suffering on a massive scale, eating meat and dairy products has been conclusively linked to heart disease, strokes, diabetes, cancer and obesity. And a United Nations report concluded that a global shift towards a vegan diet is necessary to combat the worst effects of climate change.

Congratulations, Vidyut and Kangana! If you want to join them and countless others in going vegetarian or vegan, take the 30-day pledge to explore a plant-based diet and order our free vegetarian/vegan starter kit to help you along.

PETA selected the winners by taking into account several factors, including vote count.