What does being vegan have to do with saving a jaguar? A lot.

Body-painted as a tiger, a zebra, and a giraffe, respectively, three PETA India supporters gathered in Delhi just before the International Day of Forests, which was established by the United Nations. They alerted passers-by that raising animals for food is one of the biggest causes of species-rich habitat loss – which means that eating meat can be directly linked to species extinction. 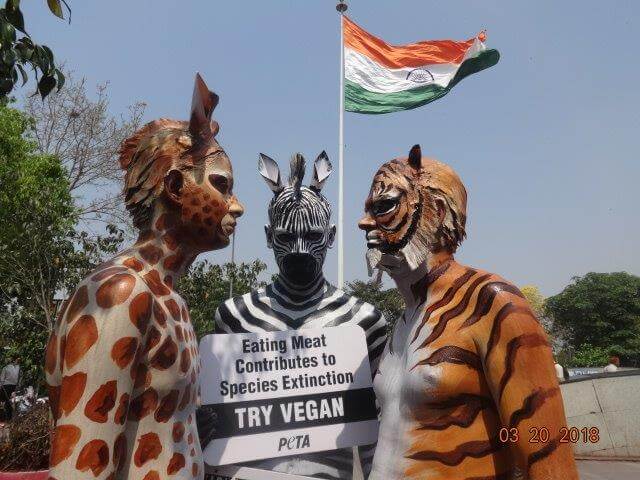 In fact, a recent study concluded that the consumption of meat may be the single biggest threat to much of the world’s plant and animal life, especially as meat producers expand their operations in places with the highest percentage of unique species – like the Amazon, where jaguars, who are near-threatened, live. In addition, according to a Worldwatch Institute report, a staggering 51 per cent of annual greenhouse-gas emissions can be attributed to the meat, egg, and dairy industries, and a United Nations report states that a global shift towards vegan eating is needed to combat the worst effects of climate change.

In addition to protecting the environment, people who go vegan reduce their risk of suffering from heart disease, strokes, diabetes, cancer, and obesity and spare pigs, chickens, cows, and other animals daily suffering and a terrifying death.