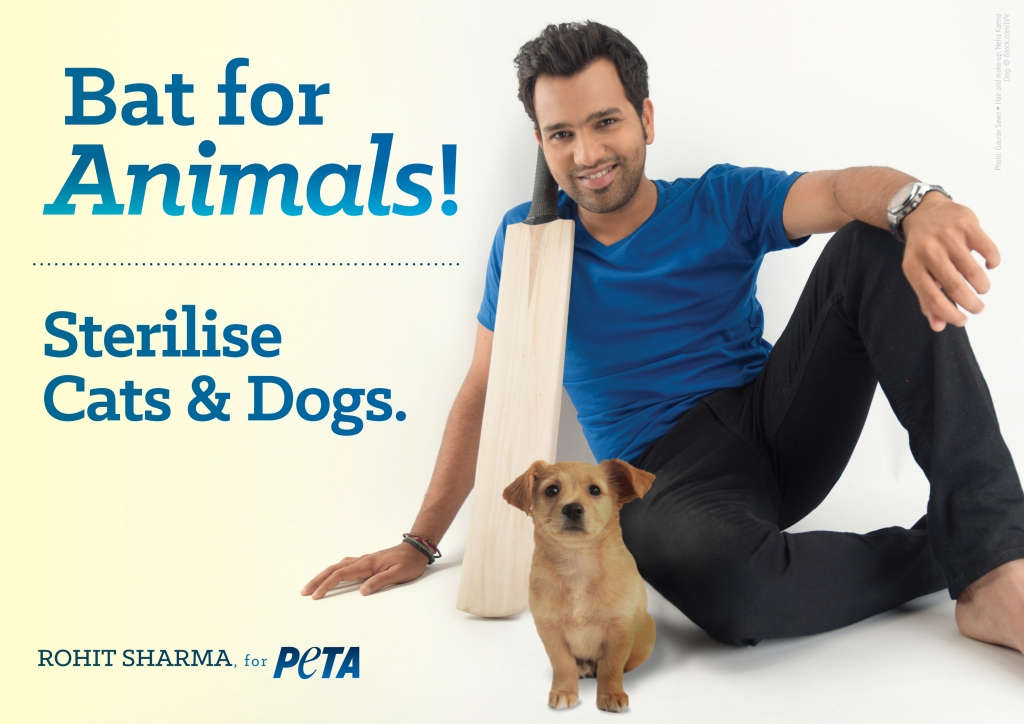 This is the batsman’s second time posing for PETA: He previously sported a facial “scar” to raise awareness about cruelty to elephants in circuses.

Sharma feels that animals should “have all the rights to get treatment like we do,” which would be a big help in ending the animal overpopulation crisis. The right-handed batsman and animal lover explains, “Sterilisation is important because I feel that if you can stop [breeding], there will be control of population among street dogs”.

In India, millions of homeless dogs and cats struggle to survive on the streets, where many starve to death, are injured or killed by vehicles or are abused by cruel people. Countless others languish in animal shelters because there aren’t enough good homes for them. Every time a dog or a cat has a litter, it means fewer homes for the dogs and cats who are forgotten in animal shelters or are roaming the streets.

Sterilised animals live longer, happier lives and are less likely to contract deadly, contagious diseases. Sterilising eliminates the stress and discomfort that females endure during heat periods, eliminates the risk of uterine cancer and greatly reduces the risk of mammary cancer. It makes males far less likely to roam or fight, prevents testicular cancer and reduces the risk of prostate cancer. It is a routine, inexpensive surgery that makes a big impact – sterilising one female dog can prevent up to 67,000 births in six years, and sterilising one female cat can prevent up to 370,000 births in seven years. PETA encourages all prospective cat or dog guardians always to get their animal companions sterilised.

Do your part to end animal homelessness and pledge to sterilise your cats and dogs today!