In the wake of reports that the US opposed a pro-breastfeeding resolution, allegedly because of business interests in cows’ milk–based formula companies, PETA Honorary Director Pamela Anderson has sent the World Health Organisation (WHO) a letter on PETA US’ behalf blasting the cruel dairy industry and thanking the agency for supporting breastfeeding. 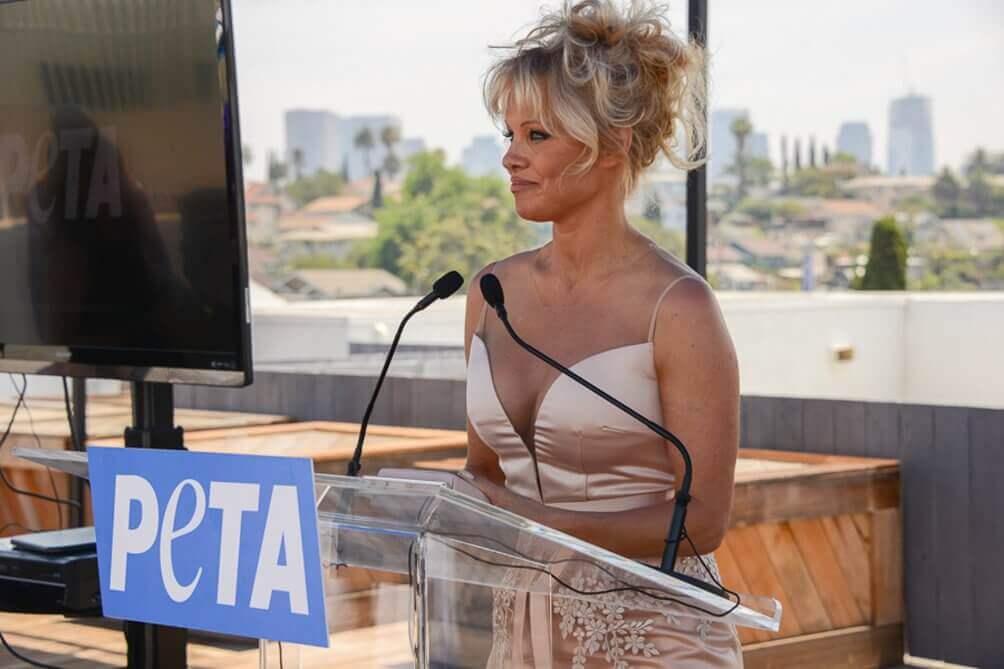 The WHO resolution draws upon research to explain why a mother’s milk is healthiest for children and urges countries “to limit the inaccurate or misleading marketing of breast milk substitutes”, . It sought to decrease the use of dangerous cows’ milk formulas and to benefit humans and cows alike. Although it was reportedly expected to be easily accepted, the US “embrac[ed] the interests of infant formula manufacturers”, rather than those of infants, which many people, including Anderson, found appalling. Citing her own experience breastfeeding her sons, the PETA ambassador wrote:

Breast is best …. There is nothing natural about giving human babies milk that is meant for baby cows …. [C]ows on dairy farms are forcibly impregnated over and over again, and their calves are torn away from them when they are only a day old …. Heartbroken mother cows cry out in mourning for days over their missing calves.

Several diarrheal diseases among the babies of impoverished mothers have been linked to the use of formulas. Families scrape together enough money to buy formula – having been persuaded that it’s better than breastfeeding, a lie that the formula companies have made in false advertising for decades – and to make it last, the mothers mix it with water that’s sometimes contaminated, possibly causing their children to contract a dangerous disease.

In Mumbai, Nair Hospital started a breast milk bank for mothers who are unable to breastfeed to ensure that they have proper nutrition for their infants in the form of natural milk and not concentrated cows’ milk. The WHO recommends exclusive breastfeeding right from when a child is born to around 6 months of age. After that, complementary nutritious food might be added in small proportions until the child reaches the age of 2.

According to the WHO, artificial feeding is an established risk factor for child health and may cause diarrhoea, infections, or allergies as well as obesity and diseases in adulthood such as diabetes and heart disease. The Breastfeeding Promotion Network of India states that if India can universalise breastfeeding, it can reduce the mortality rate under the age of 5 by 13 per cent, prevent 39 lakh episodes of diarrhoea, prevent 34.37 lakh episodes of pneumonia, prevent 4,915 deaths attributable to breast cancer, reduce obesity rates by 26 per cent, reduce incidents of type 2 diabetes by 3 per cent, improve IQs in children by 3 points, and add Rs 4,300 crore to the economy.

Reasons not to drink cow's milk:

? the dairy industry is cruel
? it can contain pus, blood, and hormones
‼️ it can be linked to acne, obesity, heart disease and cancer
? it’s weird to consume milk from another species

“[C]ow’s milk is the number one cause of allergies in babies and children, and it has been linked to And medical experts have criticised a recent attempt to derail breastfeeding in developing countries.

Nursing a baby should be a natural, beautiful practice. But the dairy industry is full of unnatural, ugly realities. For example, to keep the milk flowing, cows are artificially inseminated every year, often using so-called “rape racks“. Nine months later, the calves are taken from their mothers, usually within hours of birth. Cows used by the dairy industry spend their lives being used as milk machines, forced to produce 4.5 times the quantity of milk they normally would for their babies.

But their lives aren’t long. When not used and abused for their milk, cows can live to be 20 years old. Those used for milk are usually slaughtered for low-grade meat when they’re around 4 years old. When you buy dairy “products” – including cows’ milk–based formula – you’re supporting this cruel cycle. Cows in the dairy industry don’t get to choose whether or not they nurse their young, but many new human moms do. Please, don’t buy dairy “products”.