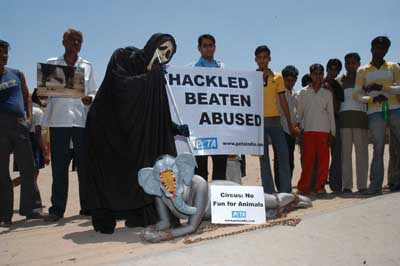 Dressed in a body suit with an elephant mask, a chained petaDishoom volunteer crouched outside Rajkamal Circus in Jaipur, in front of a huge banner that read Shackled, Beaten, Abused to demonstrate how captive elephants suffer in circuses.

On the 23rd of April, subsequent to a boy hurling a stone at him, a frustrated elephant called Bahadur ran amok at the Chaugan Stadium, Jaipur, breaking his chains and injuring some people. Bahadur, aged 38, is a performing elephant with the Rajkamal Circus, Jaipur.

This is another one of several instances where captive elephants have broken from their shackles and caused harm to humans.Circus animals are forced to perform out of fear and food deprivation. All elephant mahouts carry the ankus, a sharp metal instrument which they cruelly use to dig deep into the tender skin of the elephant to make them perform.

Circuses portray a distorted view of wildlife. In contrast to the glittery image the circus tries to project, the lives of animals who are forced to perform repetitious, confusing and often painful tricks are miserable. Animals do not naturally ride bicycles, stand on their heads or jump through rings of fire, so circus handlers use whips, electric shock prods and other tools of torture to train them. Circus animals work based on fear, knowing they will be hurt badly if they do not obey.

Elephants are forced to perform unnatural acts like playing cricket and balancing all 3 legs on a tiny stool, amongst other acts that they find frightening. Bears may have their noses broken during training or their paws burned to force them to stand and walk on their hind legs, and their toes are beaten in training if they do not dance. Even the animals’ access to basic necessities such as clean water, sufficient food and vital veterinary care is often ignored or severely limited.