PETA India organised a demonstration outside Alipore zoo in Kolkata recently following the theft of eight rare monkeys from the Alipore Zoo last Saturday. A “monkey” clad in a police uniform stood outside the zoo’s gates to draw attention to the dangers that captive animals face in zoos and to call on authorities to shut the facility down for good.

Activists were handing out leaflets when a capless official suddenly grabbed activist Charanjeet Karar for demonstrating outside the zoo wearing a police’s uniform. 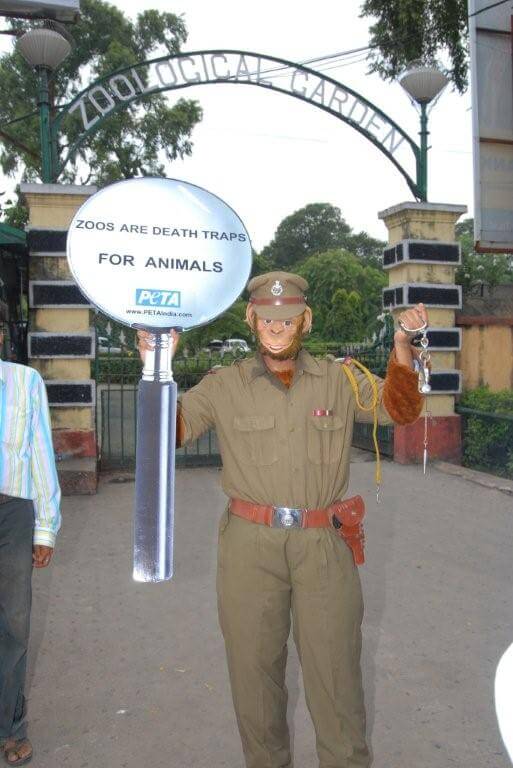 But the officer, Assistant Commissioner Anil Kar, wasn’t about to interrupt a smoke break to make an arrest. Instead, he held his coffin nail (cigarette) in one hand, and in the other he held Chiranjeet, who was still encouraging people to boycott zoos because they incarcerate and exploit animals,not to mention that Indian zoos are extremely substandard and that animals are frequently denied basic care.

The multi-tasking officer didn’t realize that smoking on duty is a no-no (Yes, Rule 13 of the Police Regulation of Calcutta states that police officers in uniform are forbidden to smoke on the streets), as is abandoning various parts of his uniform.To sign up to be part of exciting demonstrations in your area, sign up for the petaDishoom Street Team today!