After receiving a call from PETA India about the hazards of using sharp manja, and the fact that it’s illegal as per a Delhi government order, E-O-D, the biggest adventure park in Delhi, decided to make the kite-flying festival held from 14 to 16 August at the park at Sanjay Lake completely manja-free. The festival distributed only plain cotton threads, also called saddi, to participants. 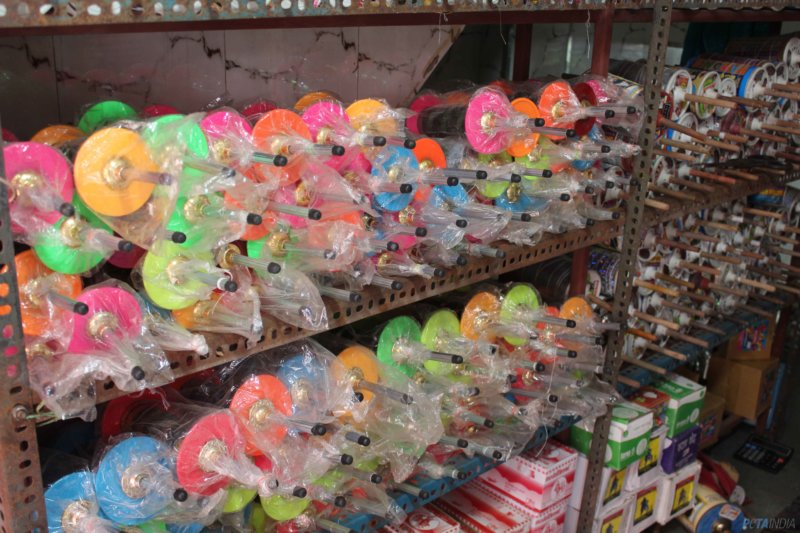 Following tips from PETA India, Delhi police this year have seized hundreds of kilograms of manja (sharp kite-flying string often made of cotton thread laced with glass, metal, or other sharp materials) from various shops in Sadar Bazaar, Bara Hindu Rao kite market, and Madhu Vihar markets in Delhi. For the first time, police registered offences against sellers under Section 5 of the Environment Protection Act (EPA), 1986, for violation of the 10 January 2017 Gazette notification of the Delhi government banning the sale, production, storage, supply, importation, and use of all forms of manja. The ban exists in order to prevent harm to humans, birds, and other animals as well as the environment. The notification permits flying kites only with a cotton thread free of any materials designed to increase its sharpness or strength.

Thousands of birds are killed every year when they’re cut or trapped by manja, which can get caught on trees or buildings for weeks. On 15 August, a boy was seriously injured after his throat was slit by manja in the Mayur Vihar area. Another tragic incident occurred on the same day, when an engineer died after his neck was slashed by manja. In February, a motorcyclist died in the Timarpur area after his neck was slashed by sharp manja. In July, a 3-year-old girl died after a stray piece of manja cut her uncle’s neck, causing the motorcycle they were riding to crash.

Selling manja is punishable under Section 15 of the EPA, including by up to five years’ imprisonment, a fine of up to Rs 1 lakh, or both, and the Delhi government’s notification authorises officers of the rank of sub-inspector and above to take action against sellers and buyers of the banned string.

Please help stop the sale and use of sharp manja across India immediately.

Manja Kills Birds and Humans – You Can Help Stop This