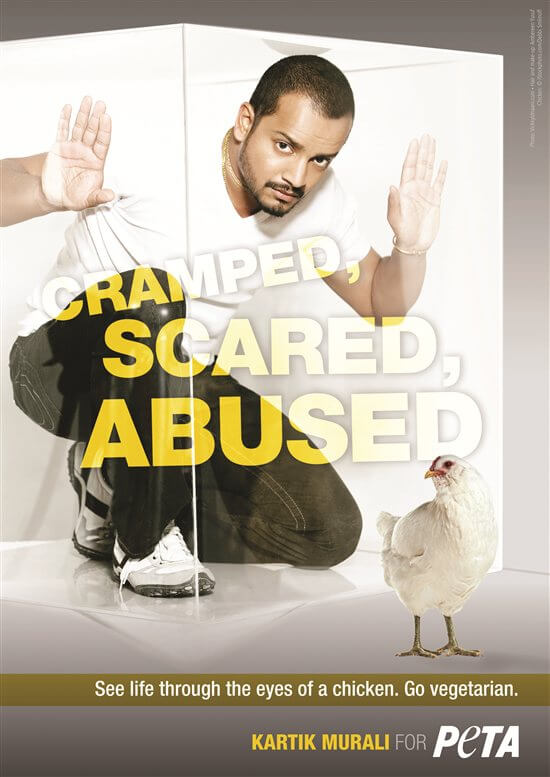 In a brand-new PETA ad – which was shot by ace photographer Vickky Idnaani, with hair and make-up by Ambreen Yusuf – Pune Warriors’ cricketer Kartik Murali encourages fans to show empathy for chickens by not eating them.

“It was extremely uncomfortable to be stuck in that cube for even a few minutes – but chickens killed for meat spend their entire lives in cages so small that they can’t even spread their wings”, says Murali. “The easiest way to help chickens and other animals – and to improve your health – is to dismiss meat from your diet and go vegetarian.”

Chickens on factory farms are crowded by the thousands into dark sheds that reek of ammonia from the accumulated waste in which the animals are forced to stand. These birds never see the light of day and are denied everything that is natural and important to them. They and other animals killed for food are crammed into vehicles and transported to slaughter in such high numbers that many break their bones, suffocate or die en route. At abattoirs, workers often hack at the throats of goats, sheep and other animals with dull blades, and many chickens are scalded to death.

The meat industry causes human suffering, too, as the consumption of meat and other animal-derived products has been conclusively linked to heart disease, diabetes, cancer and obesity. Meat consumption is also killing Mother Earth as raising animals for food is one of the largest sources of carbon dioxide and the single largest source of both methane and nitrous oxide emissions, both potent greenhouse gases. And factory farms foul the land, water and air.

Murali joins a growing list of athletes and other celebrities – including Anil Kumble, R Madhavan, Pamela Anderson, Shahid Kapoor and Sir Paul McCartney – who have teamed up with PETA India or its international affiliates to promote a vegetarian lifestyle.

This is the second time Murali has stood up for chicks. Check out his first ad for PETA.