Cutting-edge. Trailblazing. Provocative. Those words describe Prince—the man, his music, and his passionate advocacy for animals. 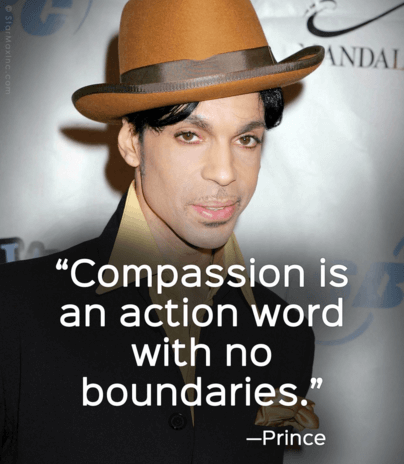 A committed vegan who never shied away from speaking the truth, Prince laid out the reasons why animals are not ours to eat in these stirring lyrics from his song “Animal Kingdom”:

A proud PETA US supporter, Prince donated “Animal Kingdom” to PETA US to use as a musical invitation to its 20th anniversary party in New York. He also attended their 2005 gala, and in 2006, Prince was crowned PETA US’s Sexiest Vegetarian Celebrity. Explaining why he chose to live and let animals live, he said simply that he doesn’t “eat anything with parents,” because “‘Thou shalt not kill’ means just that!”

Prince also staunchly refused to wear animals and proudly told everyone why. He wore a non-wool jacket on one of the album covers for his 1999 release Rave Un2 the Joy Fantastic and contacted PETA US for information to include in the liner notes. He wrote:

If this jacket were real wool, it would have taken 7 lambs whose lives would have begun like this … Within weeks of their birth, their ears would have been hole-punched, their tails chopped off and the males would have been castrated while fully conscious. Xtremely high rates of mortality r considered normal: 20 2 40% of lambs die b4 the age of 8 weeks: 8 million mature sheep die every year from disease, xposure or neglect. Many people believe shearing helps animals who would otherwise b 2 hot. But in order 2 avoid losing any wool, ranchers shear sheep b4 they would naturally shed their winter coats, resulting in millions of sheep deaths from xposure 2 the cold.

Years later, when a fan tried to give Prince a leather coat during a concert in Washington, D.C., he demurred, saying, “Please do not kill a cow so I can wear a coat!” He also once famously declared, “We need an Animal Rights Day when all slaughterhouses shut down.”

When people would ask him why he was concerned about animals in the face of widespread human suffering, Prince would respond, “Compassion is an action word with no boundaries.”

Prince, your music and your boundless compassion will continue to inspire us all.