Nutan High School students in grades 7 to 9 participated in a novel effort to save the lives of birds and humans, who often are hurt or even killed by sharp kite strings. They engaged in a “kite swap”, in which they handed over kites in exchange for animal-friendly games and sports equipment – including carrom board, chessboard, and leather-free cricket kit – provided by PETA India. The students took action following a tweet by the Ahmedabad City Police reminding parents that “Importing/Availability/Selling/Stock/Usage of Tukkal, Chinese Manja, Nylon Manja along with other Manja which are harmful in nature are BANNED and [a] Punishable Offence. SOG Crime Branch has arrested people indulging in these activities.” The exchange was organised by PETA India to alert children to the dangers of using glass-coated kite strings and other sharp manja. 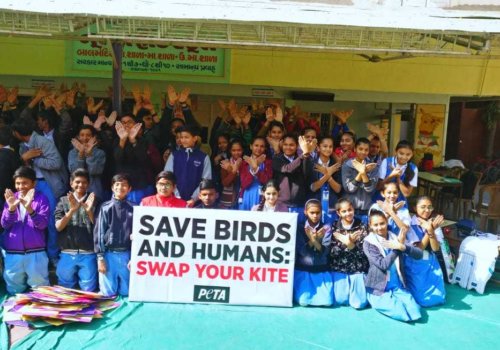 Every year, many humans and countless birds die after being injured by sharp kite-flying strings. On 30 December 2018, a 22-year-old man in Ahmedabad died after his throat was slashed by manja while he was riding a bike. The Gujarat Forest Department rescued more than 4,000 birds in just two days of kite-flying during the Uttarayan festival last year.

Note: Importing/Availability/Selling/Stock/Usage of Tukkal, Chinese Manja, Nylon Manja along with other Manja which are harmful in nature are BANNED and Punishable Offence SOG Crime Branch has arrested people indulging in these activities #FriendlySankranti #KiteFestival2019 pic.twitter.com/oclQJ3AW9v

Kite-flying threads are often made of synthetic material such as nylon, which is non-biodegradable and can litter the soil and choke drainage lines, sewer systems, and natural waterways. Manja and other metal-coated strings are good conductors of electricity, so they can cause expensive blackouts and electrocute children and other kite-flyers.
Killing wildlife is illegal under the Wildlife (Protection) Act, 1972, and injuring animals is a violation of The Prevention of Cruelty to Animals Act, 1960. Following a petition by PETA India, the National Green Tribunal banned the use of nylon or plastic threads, popularly known as “Chinese manja”, in 2017.

You can help stop the sale and use of sharp manja across the country.