From Shell to Hell

Hatcheries typically place eggs in incubators powered by electricity, which can cause chicks to be born with organ deformities and other health problems. When the chicks hatch, workers press hard on the birds’ sensitive genitals to determine their sex. In the egg industry, male birds are considered useless because they don’t produce eggs, while in both the meat and egg industries, many chicks are rejected because of size or health issues and are hence killed. Unwanted male and other chicks are set on fire, ground up alive, dumped into large bins and left to die, buried alive using earthmovers, or crushed, suffocated, or drowned. Some are thrown on the ground to be eaten by dogs, and others are fed to fish, sometimes while they’re still alive.

Such “disposal” methods are not only cruel, they also cause environmental pollution, attracting flies, rodents, scavenging birds, dogs, and other animals. Another challenge is environmental nuisance arising from poultry farms due to the generation of ammonia and hydrogen sulphide gases, causing odour; dust from the feed mill; and waste including dead birds and hatchery waste.

Workers “grade” the remaining chicks, checking for small, weak, unhealthy, and deformed birds. Though most rejected chicks are killed, some private contractors will purchase male and other unwanted chicks. These chicks suffer, too – they are often transported in cramped conditions, without food or water, across several states.

Male chicks are sometimes sold to small poultry farms to be reared for meat or to private agents who sell them on to pheri wallahs (“hawkers”). Such pheri wallahs usually dye them different colours and sell them to children to be played with as toys. These coloured, scared chicks sometimes do not even survive for a day.

In Andhra Pradesh, for example, 17,000 male chicks were loaded onto a truck in Srinivasa Farms’ egg-production hatchery. PETA India’s investigator was told that the male chicks were being taken to Odisha, where they’d be coloured and resold.

Most hens spend their lives crammed in battery cages so small they can’t even stretch a wing. When they’re just a few days or weeks old, farm workers cut off a portion of their sensitive beaks with a hot blade – without any pain relievers. Debeaking is done in an attempt to prevent frustrated birds in battery cages from pecking at each other or each other’s wounds, sometimes to death, or engaging in cannibalism out of desperation – because the damage caused impacts the profit the farm can make from the bird’s carcass. Most chickens used for eggs in India are reared in battery cages. A technician at Skylark’s hatchery, near Hyderabad in Telangana, said that the facility uses a machine for debeaking chicks. He was filmed saying, “With the machine here, beaks are not cut, they are melted via a heating system. It’s not done for male chicks as the male chicks go as wastage … they are sold to fish farms to be used to fed fish.” Debeaked birds show significant signs of pain. 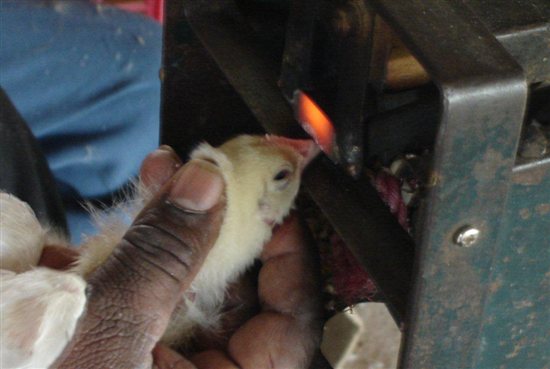 Cruelty Is Against the Constitution of India

Every citizen of this country has a fundamental responsibility to protect animals. Article 51A(g) of the Indian Constitution states, “It shall be the duty of every citizen of India to protect and improve the natural environment including forests, lakes, rivers and wildlife and to have compassion for living creatures.”

Cruel Killing of Chicks Is Illegal

Section 3 of the Prevention of Cruelty to Animals (PCA) Act, 1960, outlines, “It shall be the duty of every person having the care or charge of any animal to take all reasonable measures to ensure the well-being of such animal and to prevent the infliction upon such animal of unnecessary pain or suffering.”

As per Section 11(1)(l) of the PCA Act, 1960, it is an offence when any human “mutilates any animal or kills any animal (including stray dogs) … in any other unnecessarily cruel manner”. An offence under this section is a cognisable offence.

Under the extant laws, the killing of chickens may be allowed only under certain circumstances, including the following:

The rampant killing of baby chicks in the investigated companies does not fall under any of the above exceptions and is, therefore, illegal.

Under Sections 428 and 429 of the Indian Penal Code, 1860, too, killing animals is a cognisable offence. Section 429 makes the following provisions: “whoever commits mischief by killing, poisoning, maiming or rendering useless … any other animal of the value of fifty rupees or upwards, shall be punished with imprisonment of either description for a term which may extend to five years, or with fine, or with both.” Section 428 sets out similar guidelines for any animals valued at Rs 10 at least; the punishment for infringement in this case is a prison term of up to two years, a fine, or both.

At PETA India’s urging, the animal husbandry departments of Assam, Bihar, Chhattisgarh, and Goa have committed to using in ovo sex determination technology when it is made available in this country. In addition, Andhra Pradesh, Gujarat, Haryana, Jammu, Kerala, Madhya Pradesh, Maharashtra, Rajasthan, Uttarakhand, and Uttar Pradesh have also issued orders directing an end to illegal and cruel chick killing practices.

Companies around the world are working on in ovo sexing technology, and countries are taking steps to adopt it. France and Germany are the first to have set urgent dates to prohibit the killing of male chicks in favour of this technology. In addition, organisations including Assoavi, a trade association representing the largest egg producers in Italy, and United Egg Producers, representing the hatcheries that produce 90% of all eggs in the US, have also declared their commitment to adopting in ovo sexing technology in order to avoid killing male chicks.

PETA India requests that the Indian government work to bring in ovo sexing technology to India as a matter of urgency and require that the egg industry adopt and implement this technology to prevent the killing of male chicks. It is further recommended that the Animal Welfare Board of India develop a written standard for the humane handling of sick chicks. PETA India also recommends that the poultry industry ensure the humane and legal transport of chicks and uncage hens who are used for their eggs and provide them with more space to avoid debeaking.

Of course, the best way to spare chicks and other animals’ suffering is by eating vegan foods instead of animal-based ones. Inspired? Order a free vegan starter kit.

YOU CAN HELP, TOO!

Video evidence of India’s egg and meat hatcheries shows male, sick and other unwanted chicks are set on fire, ground up alive, dumped into large bins and left to die, buried alive using earthmovers, or crushed, suffocated, or drowned. Some are thrown on the ground to be eaten by dogs, and others are fed to fish alive. Male chicks are commonly killed by hatcheries because they cannot lay eggs.

At PETA India’s urging, the Animal Husbandry Departments of Assam, Bihar and Chhattisgarh and Goa have committed to the use of in ovo sexing technology, once made commercially available in India, to stop the killing of live male chicks. In-ovo sexing technology allows the gender of the embryo to be detected at an early stage of development so that an egg, rather than a live bird, can be destroyed. In addition, Andhra Pradesh, Gujarat, Haryana, Jammu, Kerala, Madhya Pradesh, Maharashtra, Rajasthan, Uttarakhand and Uttar Pradesh have also issued orders directing an end to illegal and cruel chick-killing practices.

Companies around the world are working on in ovo sexing technology, and countries are taking steps to adopt it. France and Germany are the first to have set urgent dates to prohibit the killing of male chicks in favour of this technology.

I therefore urge you to use your authority to safeguard male and other chicks from illegal, painful, and cruel deaths by taking the following action:

Thank you for your consideration.