The Egg Industry Considers Male Chicks to Be ‘Worthless’ – and It Shows!

These days, chickens used for meat are bred to have heavier bodies and those used for eggs to have unnaturally high egg production, so the chickens used in each industry are physically quite different. Males born into the egg industry are sentenced to death because they’re considered unprofitable. Anonymous for Animal Rights documented and provided PETA India with proof of widespread cruelty at some of India’s biggest egg and chicken-meat hatcheries and farms. The public deserves to know what happens to the countless male babies born into the misery of the egg industry and to the sick and weak ones who are unwanted by the meat industry.

Life for chickens begins and ends with pain. Instead of hens, mechanical incubators are used to hatch eggs, and when malfunctioning or improperly used, these machines can cause organ deformities and other health complications in the chicks. After birth, rough methods of gender determination that often cause distress are used to sort invaluable male chicks from profitable females. Workers use vicious methods to kill the males and other unwanted chicks, such as callously tossing them into waste bins and fires like trash. Other slow and painful murder tactics include drowning the chicks in barrels. 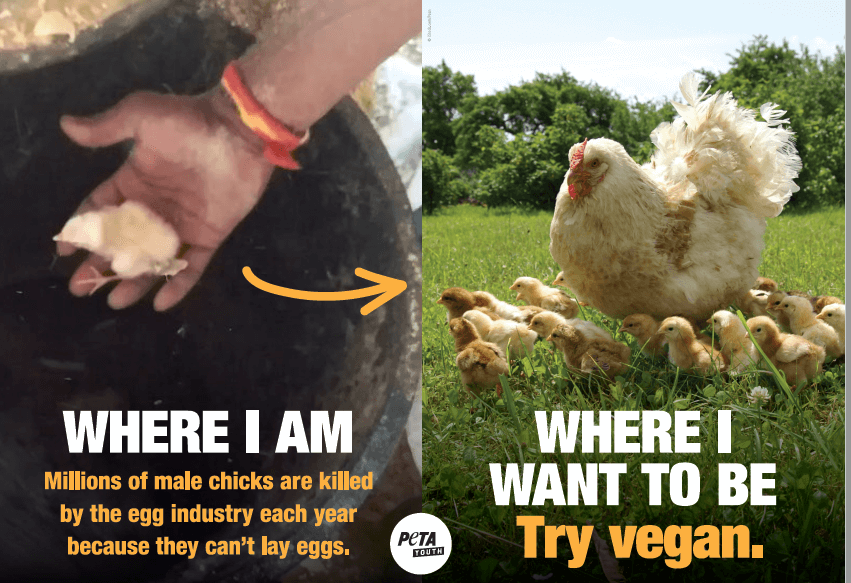 The egg and meat industries also dispose of chicks by selling their bodies to fish farms as food. Trucks full of starving newborn birds pull right up to the water, and workers chuck the animals – whether living, dying, or dead – directly into fish ponds, where they drown or are eaten alive by fish. When frightened chicks try to escape and hide under rocks, workers heartlessly kick them into the water to die.

Chicks used for eggs and meat never get to meet their mothers or play outside. Instead, workers crush and suffocate males and other unwanted chicks in large drums or dump the live baby birds into industrial grinders (along with dead chickens and eggshells) and sell their ground-up remains as food for other animals.

Male Calves Are as Good as Dead to the Dairy Industry.

The male calves are denied nourishment from their mother’s milk, which is designed for baby bovines – who have four stomachs and can weigh hundreds of kilograms before their second birthday – not humans. 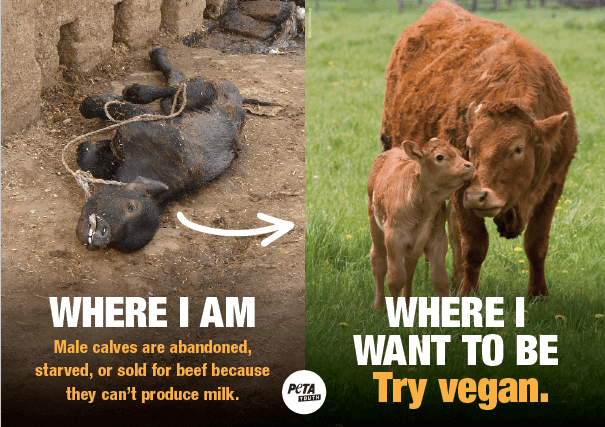 Instead of allowing them to live with their mothers, dairy farmers abandon many of the babies in the streets, where they may be struck by cars. Others are tethered and left to starve or sent to be slaughtered for leather and meat. Many calves are tied so tightly that they can’t even lift their heads, and some strangle themselves trying to reach their mothers. 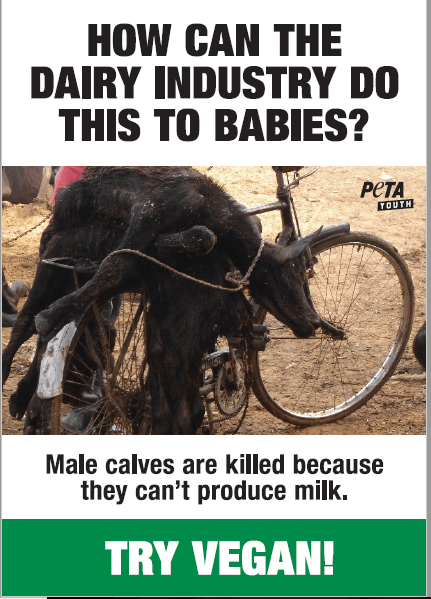 It’s important to remember that India’s supply of cattle for beef comes largely from the dairy industry, so drinking milk means helping to sentence cows and buffaloes to death.

In addition to the overwhelming violence towards male chicks and calves in these industries, there’s another reason to avoid eggs and dairy “products” – they harm human health. Eating eggs increases one’s risk of suffering from diabetes by 68 per cent, and people who eat the most eggs are 19 per cent more likely to develop cardiovascular problems. Eggs also have zero dietary fibre, and more than 60 per cent of their calories are from fat, so it’s not surprising that egg consumption can increase your risk of developing heart disease, diabetes, and even cancer. Another health hazard with these foods is contamination: porous, fragile shells and filthy farm conditions set eggs up to become the perfect hosts for salmonella, which, if ingested, can result in abdominal cramps, diarrhoea, vomiting, and, in severe cases, organ failure or death . 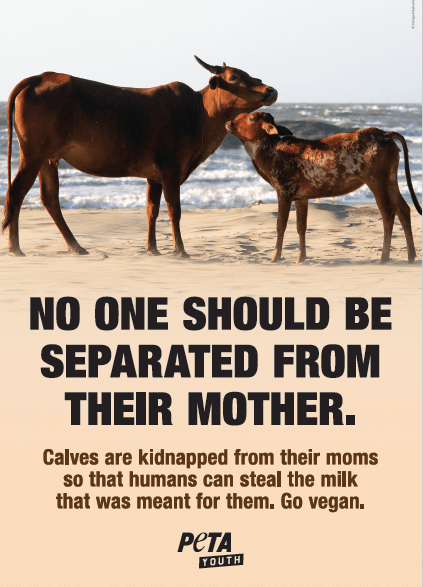 And since it’s designed to be baby bovine food, cow and buffalo milk is also wildly unhealthy for humans. In fact, three out of four Indians can’t properly digest dairy “products”, and all humans’ capacity to absorb these foods naturally decreases as we age. Those who can digest dairy milk after infancy are able to do so only because of a genetic mutation. Dairy “products” are the number one food allergen among infants and children. They also do more harm than good when it comes to bone health: the protein found in other animals’ milk leeches calcium from our bones and causes it to be expelled in our urine, plus the consumption of dairy “products” causes acne and increases one’s risk of sustaining fractures and developing reproductive cancers. Moreover, animal-derived milk can be contaminated with blood, pus, antibiotics and other drugs, bacteria, and more.

Go Vegan to Save Male Chicks and Calves!

The best way to help male chicks and calves is by going vegan. Every year, each vegan spares the lives of numerous animals. Vegan foods are loaded with the vitamins, minerals, and essential nutrients that the human body needs, and eating them reduces one’s risk of suffering from serious health concerns, including diabetes, heart disease, obesity, strokes, and cancer. Going vegan also protects the environment: meat production is responsible for 51 per cent of global greenhouse-gas emissions , is one of the largest sources of water pollution, and wastes precious resources, including land, food, and water .

Make your commitment to helping chicks and calves official by pledging to go vegan and ordering PETA’s free vegetarian/vegan starter kit for resources the whole family can use, such as tips for grocery shopping and recipes for mouth-watering dishes.