A PETA US eyewitness investigation reveals suffering, neglect, and incompetence in University of Pittsburgh laboratories.

Limbs surgically bent into unnatural positions. An unsutured wound so deep that it exposed tendons. Experiments designed to kill slowly and painfully. These are just a few of the horrors documented in PETA US eyewitness footage captured in laboratories hidden from public view at the University of Pittsburgh.

Pitt, as the university is called, uses thousands of animals—including dogs, cats, monkeys, rabbits, mice, and rats—in cruel experiments. This world of suffering was secret until PETA US went inside and uncovered what American taxpayers are funding there.Pitt raked in more than 475 million US dollars in federal research grants in 2016 alone, and much of that was wasted on experiments involving animals.

What was found: Experimenters, not veterinarians, often gave the orders regarding animal care, and experiments that were horribly cruel and seemingly pointless were approved by both the university and the federal agencies that fund them.

“Gandalf” was one of more than 550 others imprisoned in barren metal cages at Pitt.

A bite wound on Gandalf’s finger left tendon exposed, but a veterinarian declined to suture or even examine the wound.

He was selected to be used in an experimental laparoscopic surgery carried out by George Gittes—but his suffering extended well beyond the experiment. Caged alone, he was desperate for affectionate physical contact. He presented his back to Pitt staffers and gestured at them to groom it.

But Pitt’s individual housing didn’t protect Gandalf.He was bitten down to the ten donson his hand by a monkey caged nearby. The veterinarian on call reportedly refused to go in to examine the injury. Instead, she simply prescribed ibuprofen—awoefully inadequate treatment for such a serious wound. As days wore on with no further pain relief, Gandalf began cradling his hand and holding it under his armpit, apparently in an effort to cope with the pain. Records reportedly showed that Gandalf might not even have been given the ibuprofen consistently.

Three weeks after Gandalf was used in an experimental surgery, he was euthanized. The experimenters extracted tissue then sealed his body in a biohazard bag.

Other monkeys in Pitt’s laboratories slowly lost their minds, pacing, rocking, and displaying other repetitive behavior.

Would you let a plastic surgeon perform crippling, painful orthopedic surgery on you? Two young rabbits named Jack and Daniels didn't have a choice when Sandeep Kathju came for them. 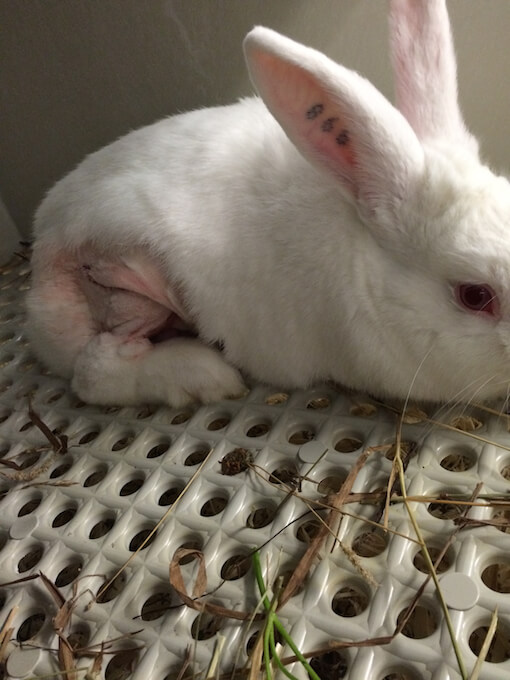 An experimenter cut into and hyperextended the limbs of rabbits, including this rabbit, Jack, as part of an orthopedic study.

He cut ligaments in their knees then contortedtheir legs into an unnatural position and finally inserted a wire into the knees to hold the legs in place. The purpose? To cause intentional trauma to the knee joints.

After more than two weeks in this excruciating position, both rabbits had lost significant weight, indicating chronic pain and distress. But Jack and Daniels were forced to endure six more weeks of this agony.

The wires placed in the knees of other rabbits similarly tormented by Kathju prevented normal movement, causing their feet to get stuck on the mesh floors of the cagesand tearing off their nails. Apparently, this was not anticipated by the experimenter.

Experimenter Gregory Cooper deliberately breeds rabbits so that their babies will have malformed skulls—even though decades of such cruel experiments have failed to produce therapies that could help humans afflicted with similar conditions.

One rabbit known only as “740-12,”who was used to produce baby rabbits for Cooper’s experiments, was seenexhibiting stroke-like symptoms. She didn’t—or couldn’t—lift her head, and wasn’t moving her back limbs at all. She died later in the day—and her four hungry babies were euthanized. A necropsyshowed that 740-12 had suffered from a rare metabolic disorder called “pregnancy toxemia,” which could have been prevented by controlling her diet—yet this change was not made.

It wasn’t until a month later, when a second rabbit named Puddles died of pregnancy toxemia, that the rabbits’ diets were finally examined.

If mice and rats believed in hell, it would look to them like Pitt's laboratories.

They were denied proper care, and many suffered from excruciating—yet preventable—ulcerative dermatitis that caused painful sores. In one experiment, Rajesh Aneja punctured the intestines of mice so that harmful bacteria would leak into their stomachs and cause septic shock. The result? According to one  veterinarian, the mice were “falling over dead.”Pitt’s animal experimentation oversight committee approved Aneja’s experiments even though a landmark study determined that the results of sepsis experiments in mice can’t be applied to human beings.

Experimenter Ira Fox implanted diseased human liver cells in mice, rats, and monkeys.Instead of providing the relief of humane euthanasia after they got sick, he forced the rats to endure a prolonged and painful death.

Mice and rats also suffered from neglect and incompetence—drowning when cages flooded and there was no escape, dying of thirst when mechanical or human errors cut off their access to water, or succumbing to injuries when they were housed with incompatible cagemates. 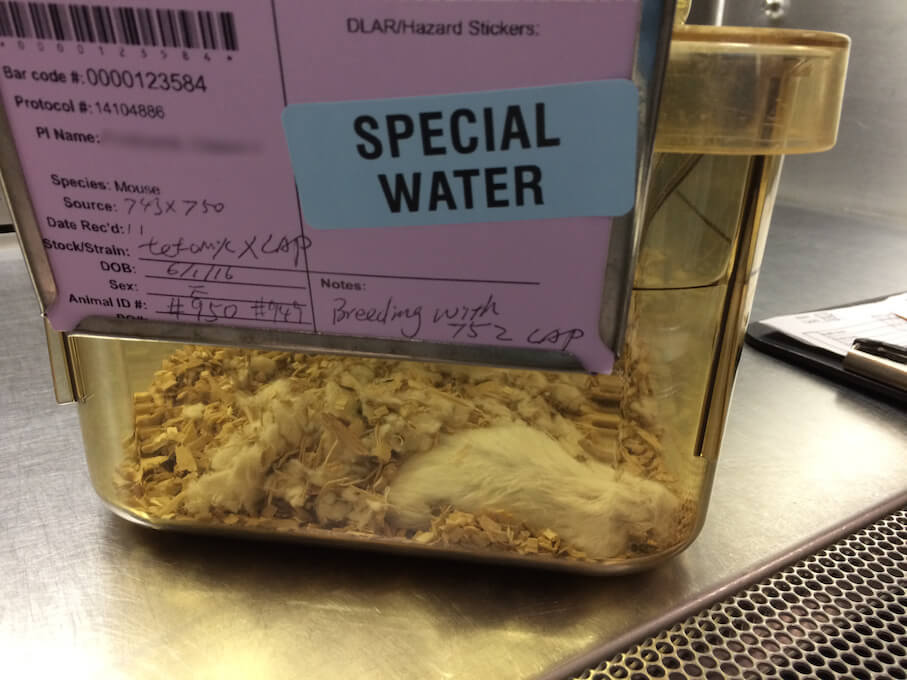 In one experiment, mice were only given water that contained a powdered antibiotic. They couldn’t or wouldn’t drink it, and more than a dozen died of dehydration. The thirsty, desperate survivors cannibalized the bodies of the dead—which,in mice,occurs only under extreme stress. 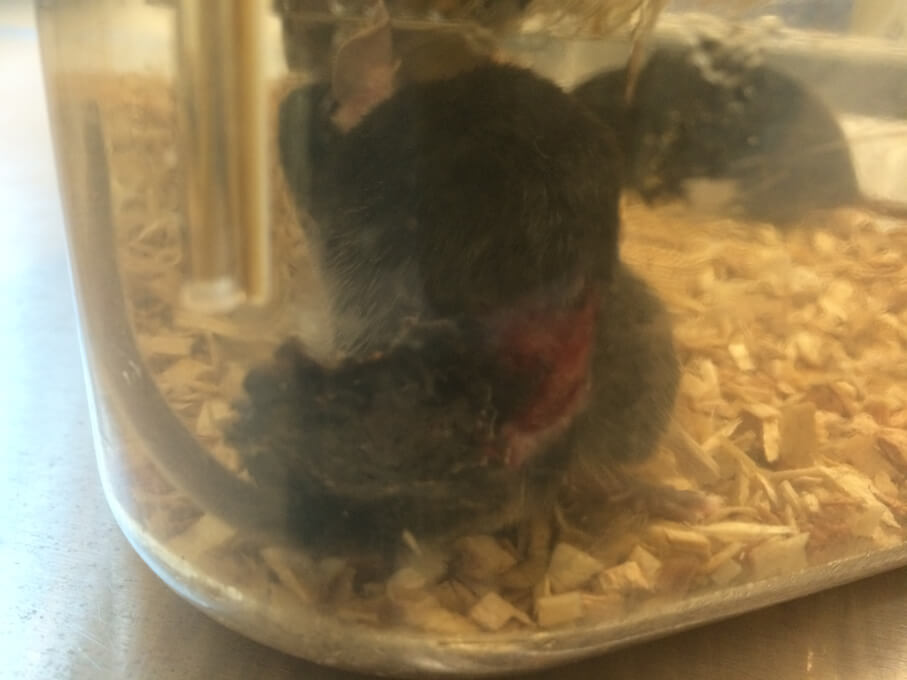 The shoddy chaos at Pitt makes it difficult to imagine that any useful sciencecould becoming out of the university.

Where is the accountability for this seemingly uncaring, incompetent staff?

Pitt’s Institutional Animal Care and Use Committee(IACUC) is the oversight body responsible for ensuring that animals in its laboratories do not experience pain or distress beyond what is deemed “necessary” for the experiment. The fact that Pitt’s IACUC approved barbaric and antiquated experiments and turned a blind eye to cruel and callous treatment of animals is a shameful abdication of responsibility.

You Can Help Stop This!

PETA US has filed a complaint with the US Department of Agriculture for alleged violations of the US Animal Welfare Act. Pitt receives hundreds of millions of dollars in grants from NIH each year—please demand that NIH put an immediate stop to funding Pitt’s cruel experiments on animals.