PETA India and our international affiliates exposed cruelty to sheep used for wool in Australia in 2013, 2015, and 2017. We unveiled abuse in the US in 2017. We revealed suffering inflicted on sheep in Argentina twice in 2015 and in Chile in 2016. PETA Asia exposed the same cruelty in the United Kingdom in 2018. In four years, the global wool industry’s systemic cruelty to sheep has been exposed on dozens of farms on four continents.

After all that, you might think that wool industry workers would be on their best behaviour and try not to hurt sheep quite so badly. But you would be wrong.

In 2018, an eyewitness in Victoria, Australia, the world’s top wool exporter, and found the farm manager and workers mutilating terrified lambs in assembly line fashion – showing, yet again, that there is no such thing as humanely produced wool.

Then, an eyewitness in New South Wales, Australia, and found that workers struck the gentle, frightened sheep in the face with sharp metal clippers.

Come meet the sheep behind your wool sweaters and blankets and see what the wool industry does to them in its production of woollen products.

What More Do You Need to See to Stop Wearing Wool?

Sheep are gentle individuals who, like all animals, feel pain, fear, and loneliness. But because there’s a market for their fleece and skins, they’re treated as nothing more than wool-producing machines. 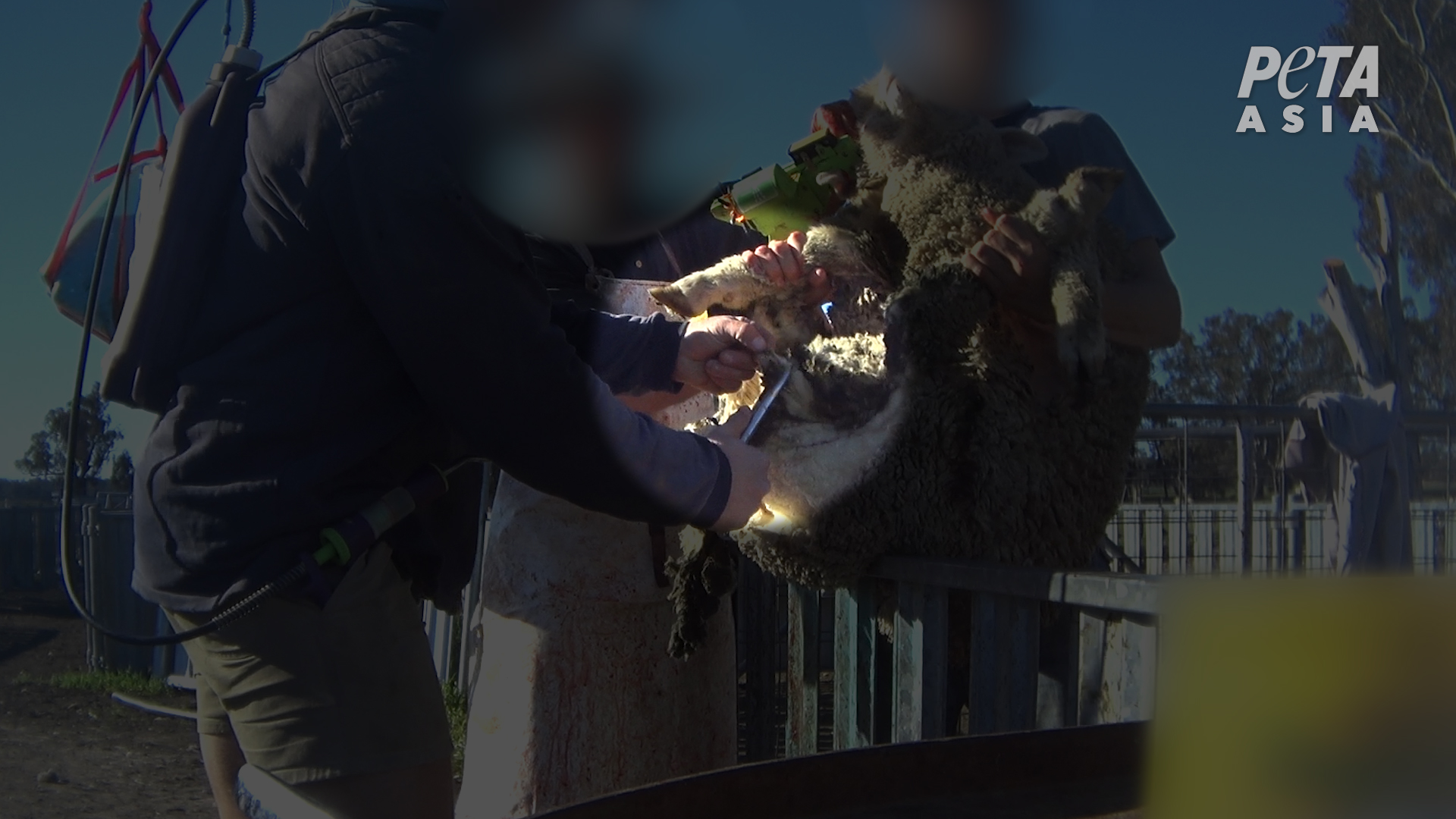 For example, a worker put tight rings around lambs’ scrotums – which is extremely painful – without anaesthetics so that their testicles would shrivel up and fall off weeks later. When the testicles don’t fall off soon enough, shearers just cut them off with clippers.

Also without anaesthetics, workers punched holes in lambs’ ears and cut and burned off their tails with a hot knife, causing them to writhe in agony as flames shot up from their flesh. 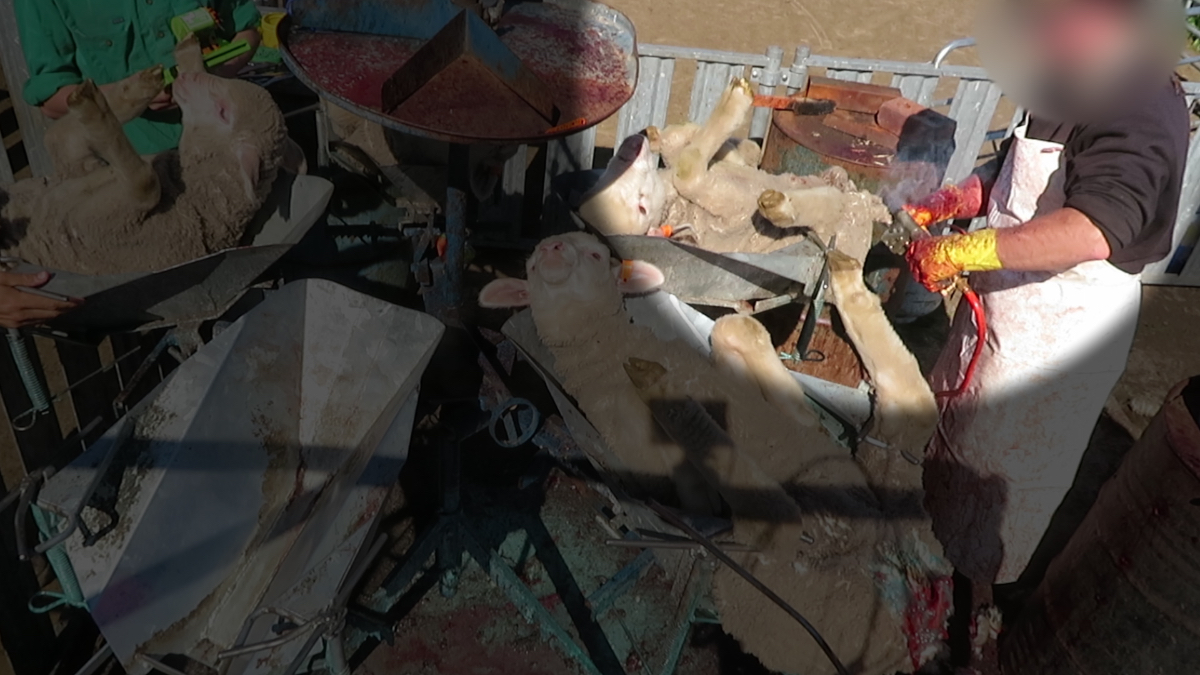 According to one former Victorian government veterinarian, “Severing tails is … an extremely painful procedure: these sheep would have felt the pain of having their spinal cord, skin, and soft tissue severed.”

These excruciating mutilations are standard procedure across the global wool industry.

And in addition to all that, many lambs die of starvation or from exposure to the elements before the age of 8 weeks.

Workers also cut chunks of flesh off lambs’ hindquarters with shears in a crude attempt, known as “mulesing”, to address problems caused by breeding them to produce excessive amounts of wool. 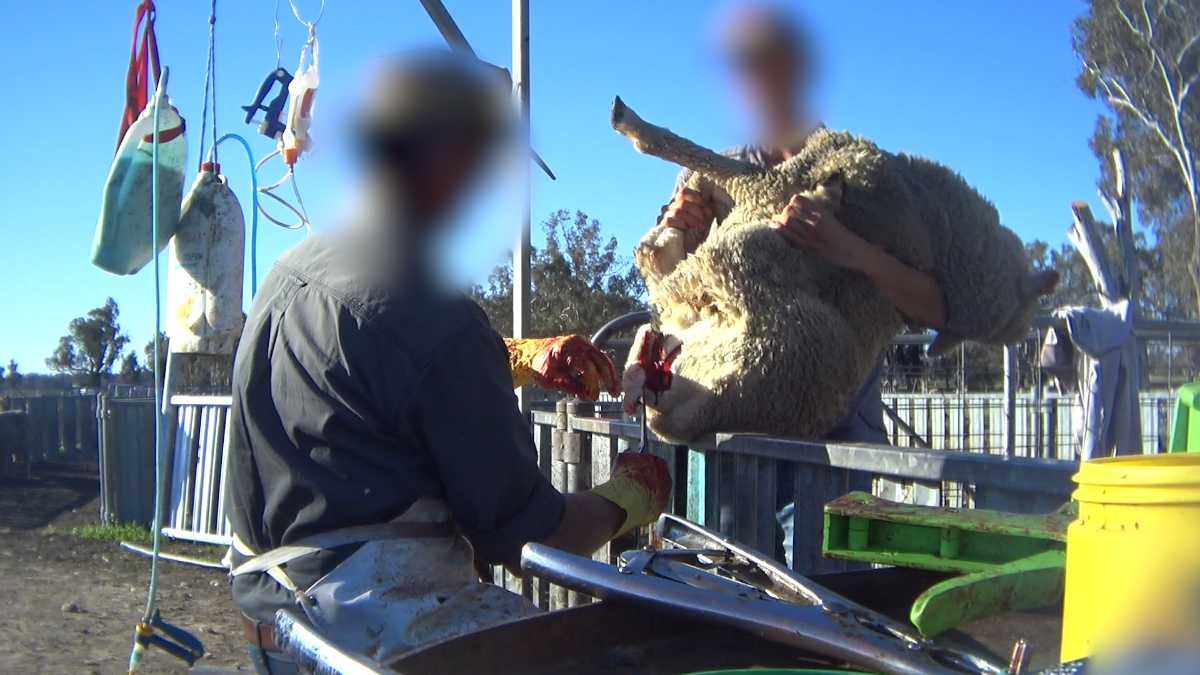 Lambs are prey animals who normally suffer in silence, rather than drawing attention to themselves and attracting further harm, but these animals were treated so badly that they cried out in agony and fear. 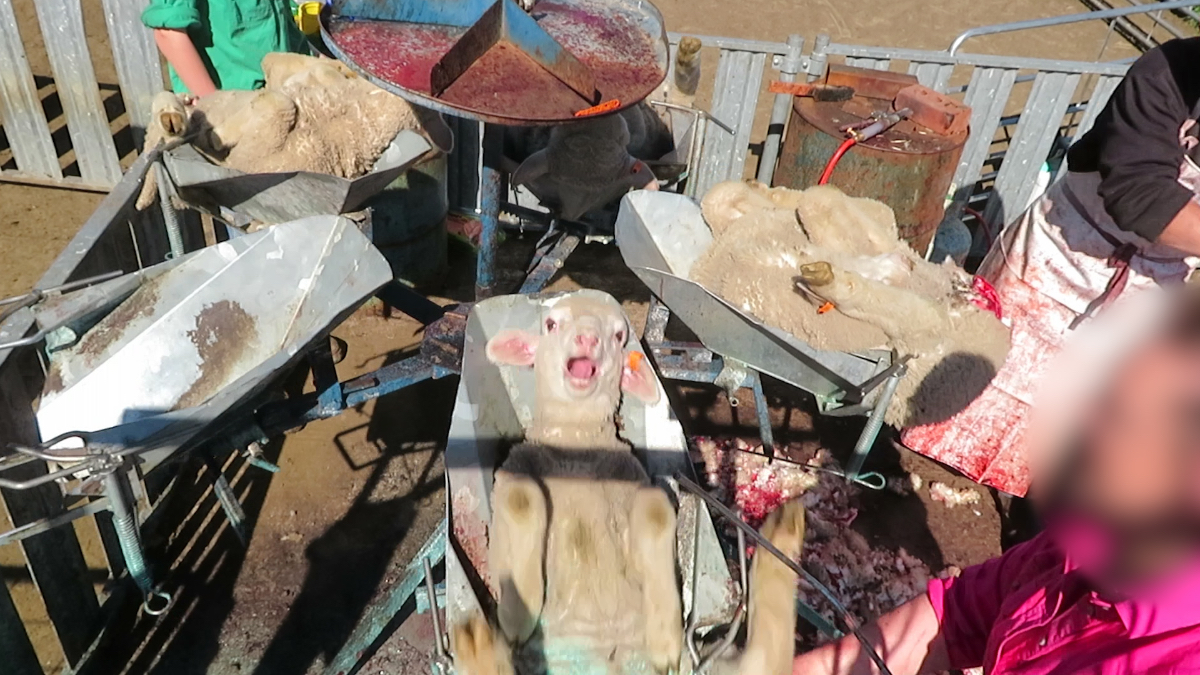 When PETA US first exposed this gruesome procedure, it prompted international outrage. Mulesing was banned in New Zealand, and Australian wool industry officials promised to phase it out by 2010.

But eight years later, most lambs in Australia are still being subjected to this torment.

All these agonising procedures took place in full view of the lambs’ mothers, who frantically called out to them and tried to get as close to them as possible. 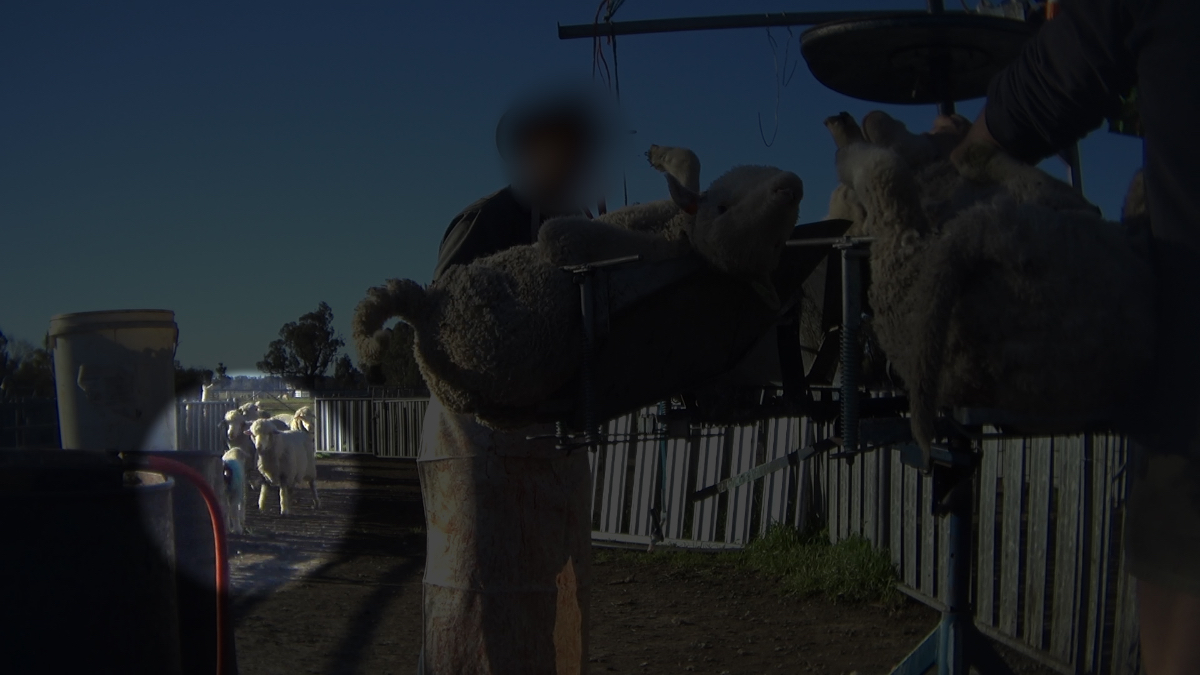 Workers then dropped the lambs to the ground or a blood-spattered mat, where many landed hard on their bloody wounds.

They cried out as they ran in search of their mothers amid the flock.

The manager slit the throats of fully conscious sheep with a knife and then broke their necks.

One sheep kicked for nearly a minute after the manager began cutting her throat. He said that some kick for a “bloody couple of minutes”. 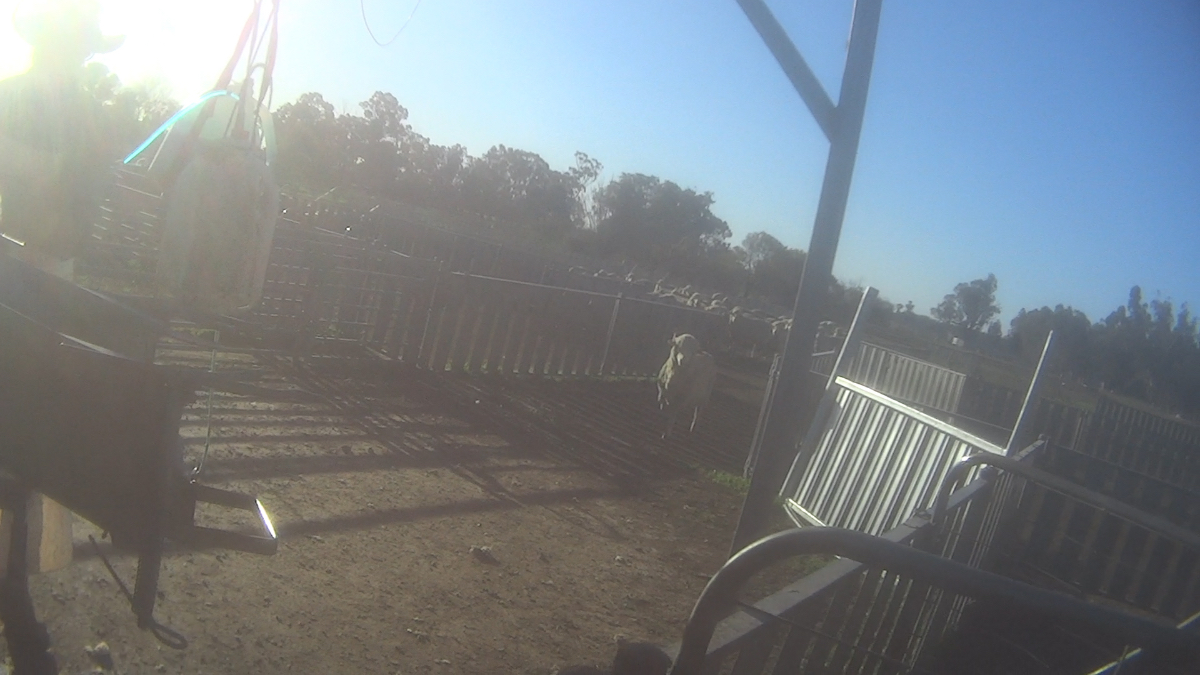 According to one veterinarian who reviewed the footage, this sheep exhibited clear signs of extreme distress and pain for nearly a minute while the manager continued twisting her head and neck and slashing her throat.

A sheep and a lamb nearby saw it all.

Even those sheep who survive years of repeated, stressful shearing face an awful fate. Every year, millions of unwanted Australian sheep are loaded onto extremely crowded multitiered cargo ships and sent on a terrifying journey to the Middle East or North Africa, where their throats are cut – often while they’re still conscious.

Beaten in the Face and Badly Cut Up

In New South Wales, an eyewitness found that shearers repeatedly struck the naturally timid sheep in the face with sharp metal clippers and in the stomach with their bent knee.

Paid by volume, the shearers worked at breakneck speed and severely cut the sheep, roughly stitching up their wounds on the filthy shearing floor with no pain relief whatsoever.

They even cut off huge swaths of the sheep’s skin.

One farmer put a tight ring around a sheep’s scrotum – which is extremely painful – without anaesthetics so that his testicles would shrivel up and fall off weeks later. When other animals’ testicles didn’t fall off as expected, shearers simply cut them off with their clippers. Again, no pain relief was given at all.

Look in your dresser and closet. Are you still wearing wool? If you are, please stop. Now is the time to rid your home of wool. It’s up to you to end these gentle animals’ suffering by refusing to buy anything made of wool. Please, give lambs something to be thankful for: ditch wool today.

No matter where it comes from or what assurances companies give you, wool is a product of cruelty to sheep, which is rampant in the industry.

Please, join us in urging Forever 21 to ban wool.